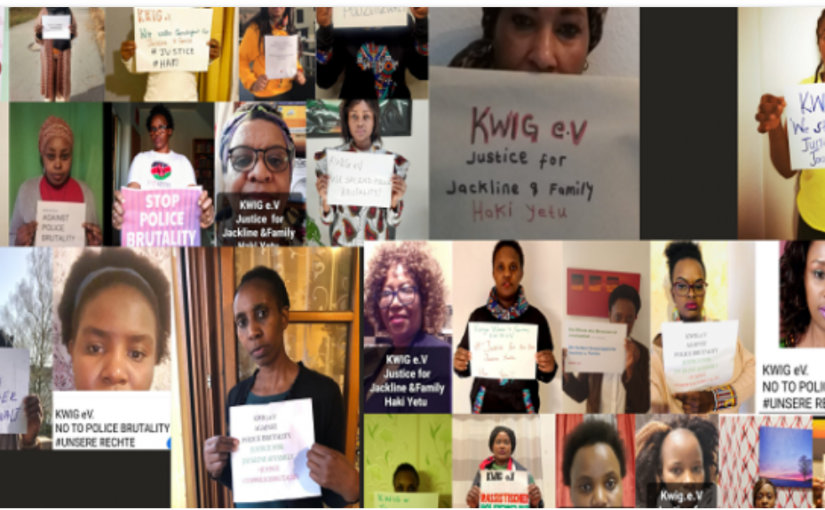 Following reports of a police brutality incident against a KWIG member in late January in Chemnitz, the top leadership of the organization has strongly condemned the act and is calling for justice for Jackline Nadler and her family.

Members of KWIG have also come out in numbers to support a social media campaign, #ISTANDWITH , calling for an end to police brutality in Germany.

Nadler and her husband Mark Kitau are alleged to have been victims of racist police violence in Chemnitz. Even worse,as stated by Nadler, she was told to strip naked in front of male police officers at the police station.

Jacky Kuhn, Executive Chair and Founder of KWIG e.V., together with other board members, are keeping contact with Jackline Nadler and her family and are following the story closely. Here is a video statement from Kuhn:

Board member Pricilla Kebati  told the African Courier, that “we at Kenyan Women in Germany (KWIG) e.V. are moving against systemic racism and police violence in Chemnitz. KWIG members and the Kenyan community are appalled, and we want to condemn this police brutality and want justice to prevail.”

In a conversation with KWIG Press, Nadler expressed alot of gratitude for the support she has had from the organization so far. She said she has “felt so much love from the Kenyan community.”

A night which started with the joy of celebrating their son’s birthday turned into a dark mark in the lives of Jackline Nadler and Mark Kitau. According to their accounts, the Chemnitz police were responding to a noise complaint from a neighbor when they first knocked on their door. During the first check, the police found no violations and left without any incident.

However, a second visit from the police prompted them to enter Nadler’s apartment to establish the identity of the persons present, Chemnitz police said in a statement. She let the six police officers into her apartment to prove that only the number of people allowed under the Corona Protection Ordinance were present. This has also been confirmed by the police.

Police spokeswoman Jana Ulbricht told BILD: “The woman was intransigent and uncooperative. She announced that she would continue the disturbance. Therefore, she had to be taken into custody. A breath alcohol test showed 1.64 per mille.”

Although Nadler admits having taken alcohol at that time, she says she was not completely drunk.

In an interview with MDR SACHSEN, Jackline gives a different account of the night. “I asked the police officers to leave our apartment because the children were afraid,” Nadler says. The couple’s son, who was in the bathroom at that time, is said to have been locked in it by the police. “They just brutally handcuffed me without telling me why,” Nadler says. Her daughter was shoved aside by the officers in the process.

Kitau wanted to help his wife and followed her to the exit of the apartment. “The officers kicked my foot several times and pushed me against the closet,” Says Kitau. His injuries left him with a broken foot, which had to be operated on. The Chemnitz police have since denied ever having touched him.

The police commented : “On the day of the operation, there was no indication that the man had been injured. When the officers left the scene at the apartment, the husband of the victim was able to walk down the stairs.”

According to the Chemnitz police, two female officers searched Nadler at the station for her own protection. Nadler however says male officers were also present during her search. “I asked them why it wasn’t just the women doing it,” Nadler adds. “I had to strip completely naked, and there were men there.”

Due to severe pain on her wrist, Nadler was rushed to the emergency room by the police, according to concurring statements.  “I told the police officers I was going to complain, they hurt me,” Nadler said. “But they laughed at me and said, I don’t stand a chance against the police anyway.”

Doctors attended to her, after which she was free to go home. “I had no shoes and no jacket, and it was minus eight degrees,” she recalls. She says she begged the police officers to drive her home. “But they said You are Kenyan. You can all run.” It was only after a long back and forth that the officers agreed to take her home, she continued in the interview. The Chemnitz police reported nothing about these statements.

The police have launched an internal investigation on the matter. Spokeswoman Jana Ulbricht told BILD: “Criminal proceedings have been initiated.”

Jackline Nadler: ” I have never had problems with xenophobia in Chemnitz, I like living here so much. I want this incident to be cleared up.”

KWIG stands against any kind of abuse and injustice.

The physical, mental and emotional trauma that Jackline and her family are going through should not happen to any human being. “The police are meant to uphold peace and provide for security. All the more the increasing brutality should be condemned by all means. We demand justice for the family Kitau,” Kuhn is quoted by the African Courier.

Kuhn is therefore calling on everyone in the community to raise their voices and “speak up” against any kind of abuse or injustice.

Through the support of the KWIG management board, there are different working groups, which were created to specialize, tackle and support members in different areas, including incidences such as the one in Chemnitz. The management has also deviced a system, where members can comfortably and anonymously seek for help, especially in cases where they feel vulnarable and want to protect their privacy.

“We relentlessly need to fight racism and discrimination – visible discrimination, of course, but also more subtle – in the justice system and law enforcement,” says Kuhn.