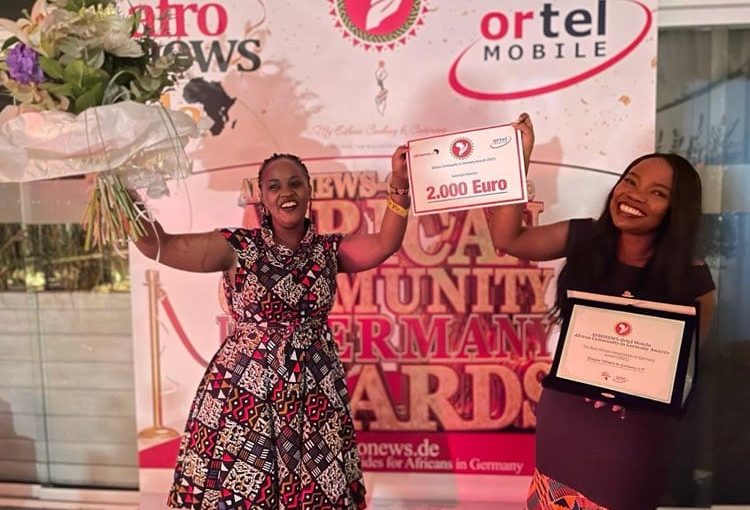 Kenyan Women in Germany e.V. (KWIG) is officially the Best African Association in Germany in 2021!

Jacky Achieng Kuhn, Founder and Chairperson of KWIG, Jane Gitonga-Tüschen, newly elected Vice-Chairperson, management board, group leaders and association members want to officially thank the African community in Germany for coming out in large numbers to vote for the association. We wouldn’t have made it this far without the support from the community.

KWIG also wants to thank Mr. Stephen Ogongo, Editor of Afronews Germany, who came up with the noble idea to celebrate the African community in Germany, Mr. Gregor Fränzel, the CEO of Ortel Mobile , whose company sponsored the event and gave us the generous prize of €2000, and Gillian Lwangu Piroth, Founder and CEO of My Ethnic Cooking and Catering (MEC), who played a big role in organising the event.

During the gala, KWIG was represented by Ms Racheal Ngigi, the Chief Financial Officer and by Nelly Okumu, the Operations Manager at KWIG.

“We are grateful and humbled for this recognition. KWIG’s mission is to promote the social and economic inclusion, advancement and empowerment of Kenyan women in Germany through contextual support and development,” said Ms. Ngigi.

“Today’s cash prize of 2000 euros will go a long way to help support our activities. We plan to use it to offer trainings to leaders of the working groups I just mentioned. We believe that if our leaders are equipped with the necessary tools, they will be in a better position to serve our members and the community at large. For example, The Domestic Violence Group must be trained on how to professionally guide a distressed victim. The trainings will be in form of online and offline workshops with qualified institutions or individuals,” she added.

KWIG is not taking the award for granted. Our responsibility to both our members and the whole African community in Germany has just become greater than ever. The support and encouragement that we have been shown with this award has challenged and motivated us to continue fulfilling our vision and mission.

We are ready to work with anyone who understands our mission and vision for the better good of the African community in Germany. Together we are stronger!

Kenyan Women in Germany e.V. is a registered community organisation which aims to provide a place for Kenyan women in Germany to preserve their family unit, join new communities, build new lives and be empowered to contribute to development in Germany and Kenya in a fully respectful and structured way.