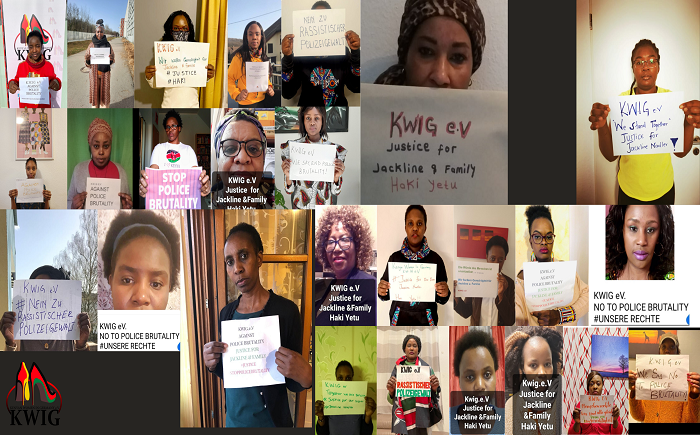 The Kenyan Women in Germany e.V is moving against systemic racism and police violence in Chemnitz.
On the 30 January 2021 yet another Kenyan family in Chemnitz has fallen victim of police brutality and they have to fight for their rights which they are actually entitled to. We the Kenyan community are appalled and we want to condemn this police brutality and want justice to prevail. It is sickening and terrifying to read the ever increasing cases of fellow African people, who get mishandled with the German police then its turned around to look like the victim is the perpetrator! In most cases the violence used is not justifiable since the people involved are unarmed and have no history whatsoever of going against the law. We cannot just sit back and watch profiling mess around with our quality of life yet we are law abiding and pay our taxes just like any other resident of this country.
The Chairlady of KWIG e.V. Mrs Jacky Kuhn said „we relentlessly need to fight racism and discrimination – visible discrimination, of course, but also more subtle – in the justice system and law enforcement.
She reiterated „Our children need a safe place to live in and when the perpetrators of the violence bring it into our houses, we do not know where to turn to“.
The police are meant to uphold peace and provide for security. All the more the increasing brutality should be condemned by all means. We demand justice for the family Kitau.
Oury Jallos case is to date, almost 16 years down the line just but still an allegation. Cases like this that get to see the light are just but a few. There are so many other uncountable cases that never see the light!
Members of the Board of Directors of KWIG e.V. urged it’s members and members of the African BIPoC community to join hands together to tackle structural racism in Germany and Europe at large. KWIG Members demand an end to police brutality in Germany.
KWIG has initiated an online campaign #IStandWithJackline&Family with the aim to reach as many people as possible, and also to demand that personnel consequences should be taken against the police employees who were brutal.