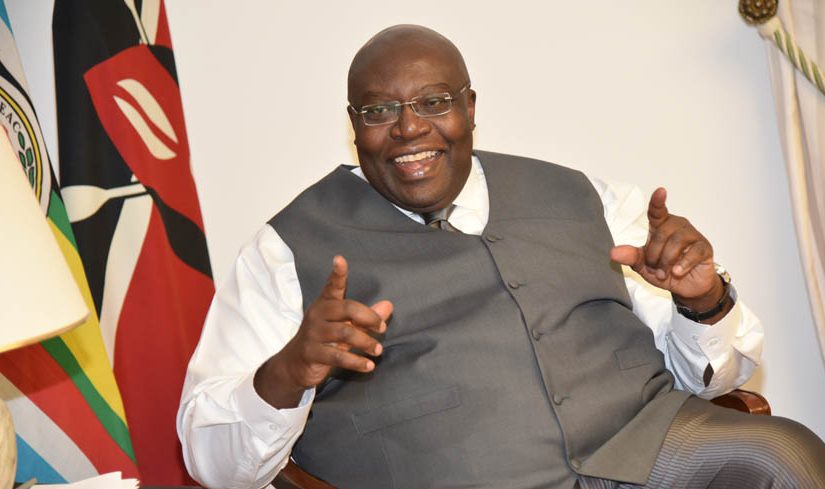 On April 25th, KWIG played host to His Excellency Thomas Boniface Amolo, the Kenyan ambassador to Germany, on its private Facebook Group Page.

The event, which was broadcasted live on Zoom and Facebook from 4:00 p.m, saw Honourable Mr. Amolo introduce himself for the first time to the entire Group, which has a network of over 2,000 women. Mr. Amolo gave a brief history of his journey to his current position, his agenda for his tenure and how he plans to work with the Kenyan diaspora in Germany and both the German and Kenyan governments to archive his set goals. After his presentation, he was kind enough to remain behind and answer several questions that were posed by those present.

The fact that Mr. Amolo is more than qualified for his position is no secret. He was born in Nairobi and holds a BSc (Hons) in Political Science and a Diploma in Diplomacy from the University of Nairobi. He also possesses a Masters degree from the School of International and Public Affairs at the Columbia University New York.

In his career as a diplomat, Mr. Amolo has served, among other capacities, as Kenya’s High Commissioner to South Africa and Nigeria. Before his latest appointment to Germany , he was the Political and Diplomatic Affairs Secretary at the Ministry of Foreign Affairs. He was also a Special Envoy for Kenya’s campaign for membership of the UN Security Council.

Prior to the long-awaited event, His Excellency had several meetings with KWIG board members, who introduced the association and its functionality to him. These meetings were also graced by Ambassador Dr. Esther Nyambura  Mungai, members from the consular section and other staff members of the Kenyan Embassy in Berlin.

Preparations for the  KWIG Meet & Greet  (Meeting with KWIG Admins)

Having the Kenyan Ambassador to Germany grace any event is a great honour. KWIG board members and admins therefore saw an importance in meeting  Mr. Amolo beforehand, in a bid to introduce the association to him.

The board members, led by Jacky Achieng Kuhn, chairperson and founder of KWIG, presented the association as a network of over 2,000 Kenyan women in Germany, whose aim is to promote the social and economic inclusion, advancement and empowerment of Kenyan women in Germany through contextualized support. KWIG’s working groups, which are the heart of the association, were also introduced. The groups organize projects that focus on various topics of interest. Here, members use their professional know-how on a voluntary basis to realize the goals of the association.

The officials went ahead to list some of the things that Kenyans in Germany expect from the embassy in Berlin. These include clear and proper communication from the embassy, transparency and easier access to services and the availability of investment opportunities in Kenya. KWIG, on the other hand, also offered to work together with the embassy to help facilitate the agenda of both parties.

“From what I have heard, you guys are doing a pretty good job,” said Mr. Amolo.  Among other things, he suggested creating an interface between KWIG and the embassy, which will serve as a way to improve the communication of the embassy with the Kenyan diaspora. He was also keen to meet the various representatives of the 16 states of Germany to be able to connect with the Kenyan communities in the respective states. It was pretty clear, that Mr. Amolo is passionate about getting to know Kenyans in Germany, which will go a long way to help him implement his agenda.

Ms E. Malinda,  the Immigration Attache, emphasized the importance of the relationship between Kenya and Germany. “Our government is very intentional on things to do with Germany,” she said, referring to the introduction of the permanent residency for Kenyans who have taken other nationalities. Germany is among the few countries that does not permit dual citizenships for Kenyan nationals. This Kenyan permanent residence permit will enable any Kenyan holding a German passport to travel to the country without applying for a visa. In terms of dual citizenship, the problem is not with Kenya, as it allows its citizens to have double nationalities. It is Germany that does not allow dual citizenships.

Regarding various complaints about delays in processes such as renunciations, passports and others, Emma asked Kenyans to follow up with the embassy individually, as each case is different from the other. For example, some delays are brought about with mismatching documents due to change of identity of the applicant. Moreover, some processes are done in Kenya, which means the embassy in Berlin has little influence on how long they might take. However, if followed individually, an update on the processes will be given to the applicant.

Mr. Amolo also insisted that any complaint on immigration matters can be forwarded to the consular section and due diligence will be done.

Finally, the day arrived and the excitement and enthusiasm of the KWIG members to meet the esteemed guest of honour could not be hidden. They turned up in hundreds for the live event.

Mr. Amolo started by introducing himself and took the audience through his education and career path.

He later went on to say that increasing the engagement between Kenya and Germany is one of his main goals. Germany is the most powerful economy in the EU. Since1963, Germany has over 100 companies in Kenya. “What we’ve seen in Germany is that over the years, we have not had robust interaction,” said Mr. Amolo. The increase in interaction is not only aimed at the German government, but also with the people and businesses. This will improve trade and investments and broaden the ability of German companies to take deeper hold in Kenya.

Mr. Amolo also emphasized on the huge importance of the diaspora. “The diaspora is another area that I would like to engage, to uplift their ability to make money for themselves, to live better lives for themselves, and to leverage that ability to do good things for Kenya.” He added that he plans to interact with all groups in Germany.

Although Kenya is doing its best to slow down the spread of the coronavirus, the country is in need of more vaccines. At the time of the meeting with KWIG, Mr. Amolo had already penned a letter to the German government, to facilitate the possibility of Kenya acquiring some vaccines.

Commenting on the eligibility to vote, Mr. Amolo said that IEBC , the body in charge of elections in Kenya, is open to allow Kenyans in Germany to vote. However, it has to be done progressively, according to the constitution. “But numbers will help”. Meaning that Kenyans in Germany must also be willing to practice their constitutional right. “If we have good numbers, we will be able to show that we need those ballots.”

What Mr. Amolo expects from KWIG

Mr. Amolo said he seeks the indulgence of KWIG in terms of feedback, suggestions and recommendations on the work he is doing. He encouraged anyone with issues to contact his office and their matters will be looked into by relevant persons. “Help us to do our job better.” With this respect, he recommended that his communication team works with the KWIG press team to better the embassy’s communication strategy. He added that he will also be creating a communication interface with other groups.

He also asked to have townhall meetings, even virtually considering the current pandemic. He is looking forward to having the 16 conversations with the different German states. Mr. Amolo also expects KWIG to interact with other groups.

A possible meeting with leaders from different Kenyan Groups at the end of the year is something that he considered a great idea. If corona restrictions will not permit it, a virtual celebration of Jamuhuri Day or any other preferred date  is something that he recommended.

He also urged Kenyans to do remittances and go to the CBK website for further information. “It’s a good thing for us,” he added.

Most of the questions asked by those present revolved around complaints concerning the consular section; delayed delivery of important documents like passports, certificates of impediments, visa requirements for former Kenyan citizens, among others. Some also called for a more effective customer service from the embassy.

Other inquiries touched on making investments in Kenya for both Kenyans and former citizens, and the possibility of there being an easier way of getting dual citizenship. For most of the attendees, having both German and Kenyan passports will go a long way to solving very many hurdles and may strengthen the bond between the two countries.

Mr. Amolo responded by saying that effective service from the embassy should be the norm and not seen as a miracle. The conclusion was that KWIG officials prepare a petition addressing the pressing needs of Kenyans in Germany in terms of priority and hand it over to the embassy.

At the time of publication of this article, KWIG officials had already handed over the first petition for a ‘One-Stop Shop’ in Berlin, where a wide range of services can be obtained from the embassy. The petition highlighted the issuance of the Kenyan IDs at the embassy as a pressing matter. Other issues included the streamlining of processes surrounding the issuance of passports, marriage certificates, certificates of impediments and the application of Kenyan visas for former Kenyan citizens, just to mention a few.

After handing over the first petition, KWIG officials immediately dived into preparing a second petition for the possibility of  an easier process of acquiring dual citizenship.

As expected, KWIG members were ecstatic about having met their ambassador virtually. They were even more taken by his willingness to mingle and talk to Kenyans. Facebook user ‘Wanjiku Dee Lindner’ wrote ‘I love him already. Thank you, Sir,!’. Susan Tielkes wrote ‘Thank you very much Sir for your time and clarifications on the queries, we look forward to having a great communication with you.’ Krissi Kraus added, ‘Thanks for the great session, it was very informative and interactive. Looking forward to great initiatives.’

These are just but a few of the hundreds of positive feedback that the members gave from the meeting.

It would be safe to say that meeting  with Mr. Amolo helped those present understand how the embassy works and helped drown the impression that the institution that represents the Kenyan government  is unreachable. Many would agree, that the meeting was a great move to start repairing  the strained relationship between the Kenyan diaspora in Germany and the staff at the embassy in Berlin. The strain has been attributed to lack of clear communication between the staff at the embassy and those whom the institution serves.

The interaction with Mr. Amolo is just the beginning of a long cooperation between KWIG and the Kenyan embassy in Berlin.